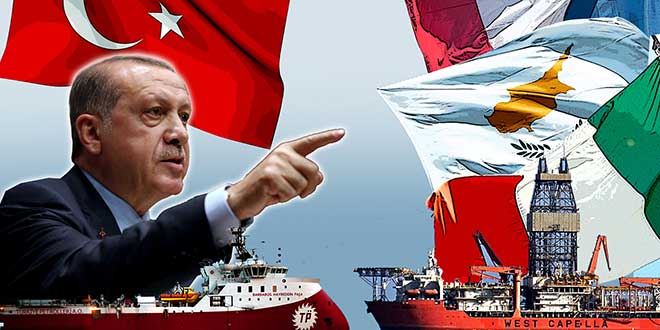 The key international convention that establishes sovereignty over territorial seas, and rights in continental shelves and exclusive economic zones (EEZ), is the United Nations law of the seas, UNCLOS.

It provides a legal framework for the signatory countries for ownership rights and jurisdiction concerning these areas.

The legal framework covers, among others, rights to natural resources in these areas, for the purpose of exploring and exploiting them, right to exercise jurisdiction over them, controls to protect and preserve the marine environment in them, and claims for compensation.

UNCLOS has been ratified by 167 states, including the US and EU, but not Turkey, Israel or Syria.

Cyprus proclaimed its EEZ in accordance to UNCLOS and launched this with the UN in 2004.

Cyprus claim to its EEZ is recognized by the EU, the US and the international community. It is on this basis that Cyprus has successfully conducted offshore licensing rounds and exploration of the licensed blocks, with the participation of major, reputable, international oil & gas companies.

Disputes with Turkey However, Turkey is disputing Cyprus’ rights to an EEZ and its offshore hydrocarbon deposits. In effect, Turkey claims that its continental shelf has precedence and islands, such as Cyprus, are not entitled to full EEZs. It claims that the capacity of islands to generate maritime zones should be limited in competition with the continental coastal states.

This is also Turkey’s argument in its lengthy dispute with Greece over the limits of their borders in the Aegean Sea and in the Mediterranean. The dispute nearly resulted in war between the two countries on several occasions and it is a source of constant conflict.

At the instigation of Turkey, Turkish Cypriots have also laid claim to the rest of Cyprus’ EEZ, in effect leaving Cyprus with little of its EEZ outside its 12-mile territorial waters. Turkey’s position Turkey claims that it has ‘sovereign and legitimate’ rights to proclaim its EEZ including the maritime area bounded between 32°16’18’’ E longitude and 33°40’N latitude covering a jurisdictional area of at least 145,000 square km, but has not yet officially declared an EEZ to the UN.

The western boundary of Turkey’s claimed EEZ may be on 27°22’E longitude, the final status of which is to be determined in accordance with future delimitation agreements between all concerned parties.

Turkey claims that its EEZ should be coextensive with its continental shelf, as defined in notes submitted by Turkey to the UN in March 2004 and March 2013, emanating from what it calls its ‘ipso facto and ab initio’ rights.

Turkey’s position in EEZ delimitation in the East Med is based on what it calls the ‘equity’ principle that calls for consideration of special circumstances to respect proportionality and non-encroachment rules.

Especially with respect to Greek islands and Cyprus against the ‘disadvantaged’ Turkish mainland, Turkey takes the view that relative lengths of adjacent coastlines in adjusting an equidistant line for maritime delimitation should govern EEZ delimitation in the East Med.

Turkey is a non-party to the UNCLOS treaty, and as such it claims it is not legally enforceable against it, having declined to sign and ratify it.

In addition, Turkey does not recognise Cyprus EEZ delimitation agreements with Egypt, Lebanon, and Israel. It claims that as a ‘de facto’ divided island, the ‘Republic of Cyprus’ cannot represent the interests of the northern part of Cyprus unless the island is reunited, with a single EEZ.

It also claims that given that Turkey’s respective coastline is more than twenty times longer than that of Cyprus, the latter’s EEZ toward the west should only be coextensive with its 12-mile-wide territorial waters according to Turkish view.

Turkey believes that the EEZ delimitation issue with Cyprus is directly linked to the wider context of bi-communal talks and reconciliation on the island, which is part of the ongoing comprehensive settlement negotiations.

As such it should be left to the discretion of the new federal government, should one be formed, as opposed to ‘unilateral pursuits’ by the ‘current’ government of Cyprus.

This is covered by three ‘laws’ passed between June 2002 and January 2012 delimiting the ‘territorial waters and EEZ’ of northern Cyprus. They state that the principle of equity will be utilised in such delimitation activities and detail the jurisdiction rights of the Turkish Cypriots within this ‘EEZ’.

Turkish Cypriots also signed a ‘Continental Shelf Delimitation Agreement’ with Turkey in September 2011. This ‘Agreement’ states that it has been signed in line with international law and with respect to the principle of equity.

It is on this basis that Turkish Cypriots declared an ‘EEZ’ which in effect claims that half of Cyprus EEZ belongs to them, including blocks 1,2,3,8,9,12 &13.

Clearly, this is a highly implausible claim, made for tactical political reasons and has no legal basis as the Turkish Cypriots do not constitute an UN-recognized state.

Implications As a result of these positions, Turkey considers any activities by Cyprus in block 7 and west of it, including blocks 1,4,5,6, to be a ‘red-line’, which will cause it to intervene. How will this be pursued in practice is not clear.

The position of the oil companies is that blocks in Cyprus’ EEZ are awarded to them legally and they will proceed with exploration and drilling. They have the political support of their countries, ie Italy, France and the US. Recent statements from these countries support this.

Cyprus declaration of its EEZ and delimitation agreements with neighbouring countries are in accordance with UNCLOS and are recognized by its neighbours and the international community.

UNCLOS has secured such a widespread global recognition, that most international lawyers consider its provisions on maritime boundaries and undersea resources as part of customary international law.

This means they are binding on all states whether they have acceded to UNCLOS or not. In addition, Turkey has concluded continental shelf and EEZ boundary agreements in the Black Sea with Bulgaria and Ukraine, as well as a continental shelf agreement with northern Cyprus, all utilizing UNCLOS principles.

In effect these reinforce the relevance of UNCLOS to Turkey. It cannot choose to apply it preferentially. The arguments it uses ignore small, uninhabited, islands. This hardly applies to Cyprus – a UN and EU member state. In a contradiction, again, it recognizes the rights of northern Cyprus to an ‘EEZ’ and has even agreed to continental shelf delimitation with it, even though it is part of an island!

Sooner than later Cyprus will have to confront these illogical and contradictory positions of Turkey and possibly take this case to international court arbitration. Total and Eni plan to start seismic surveys in block 6 next year. Turkey is threatening enforcement of ‘red lines’ and even drilling in block 6. This must be confronted.