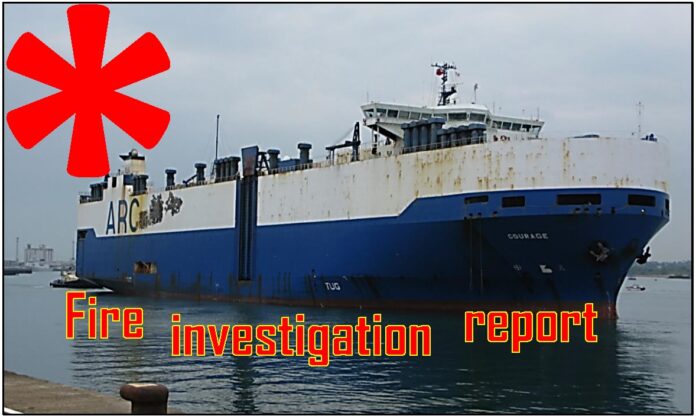 The US National Transportation Safety Board (NTSB) issued the report of its investigation of the 2 June 2015 cargo hold fire on board the US-flagged roll-on roll-off (ro-ro) vehicle carrier Courage while transiting from Bremerhaven, Germany, to Southampton, United Kingdom. The accident resulted in extensive damage to the vessel’s hold as well its cargo of vehicles and household goods. As a result of the damage, estimated at $100 million total, the vessel’s owners scrapped the vessel. The probable cause of the fire was electrical arcing in the automatic breaking system (ABS) module of a vehicle carried on board.

Fire investigators hired by the vessel owner and working with the US Coast Guard examined the affected spaces and identified the likely origin to be a ramp on the starboard side, aft, from Deck 8 to Deck 10 (the moveable Deck 9 was almost completely pressed up to the bottom of Deck 10). Vehicles on this ramp were completely destroyed by fire, and there was substantial damage to the ramps from Deck 10 to Deck 11 and from Deck 11 to Deck 12 that were immediately above this area.

The actions of the crew in combatting the fire were timely and appropriate. The crew was mustered and fire teams were manned soon after the general alarm was sounded. The master, chief mate, and chief engineer properly assessed the danger and activated the CO2 fixed firefighting system, quickly extinguishing the fire. The fire teams performed boundary cooling and monitored space temperatures. They did not attempt to re-access the space, which could have caused a reflash. No lives were lost and the vessel was able to continue to port.