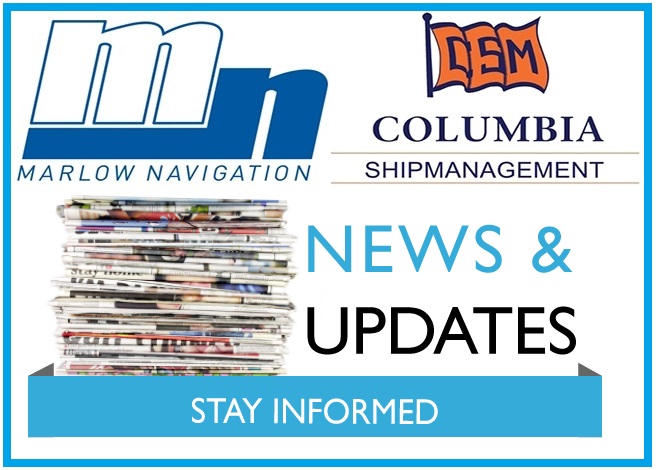 Mark O'Neil, current President of Columbia Shipmanagement Ltd (CMS) and future CEO of the intended merger between CSM and Marlow Navigation, was a guest on the radio show "It's All about Shipping!".

O’Neil, briefed the audience on the process so far and the future vision of the fourth major merge & acquisition in global ship management worldwide, between two of the most dominant ship management companies in Cyprus. Mark O’ Neil noted that big is good and relevant as long as economies of scale are achieved, stressing that it is their absolute priority to continue to offer each and every client tailored services and that each client is made to feel that they are the only client of the company, which is a value which O’Neil has upheld strongly throughout his career.

It was also noted that this decision has been made with the interest of all staff in going forward completely at heart. In particular he stated that neither company made a single person redundant since 2008, despite the downturn and neither company will make a single person redundant as a result of this merger and that’s this is a guarantee which is pretty incredible, in going forward with this assurance.

Commenting on the effect of the merger for the Cyprus market, O’Neil explained that while the physical presence of both companies on the island will remain the same, this merger will re-enforce Cyprus is standing as probably the leading maritime center for ship management, by a proactive expanding company into all sorts of maritime services from the base of core shipmanagement business present on the island. Hopefully this will inspire other companies to come to Cyprus and it will inspire people within Cyprus to go forward in shipping, leading it’s way to the establishment of Cyprus as an international maritime hub.

He further explained that with this merger, they are looking at a really exciting business plan and expansion to other maritime services which will be developed from the core business. An important step towards this, was the partnership with Lufthansa of both companies separately, announced recently in the press. O’Neil explained that what they are trying to do via this partnership, is bring what is available for years in airline IT, solutions and processes into the shipping industry which is something new and revolutionary for shipping.

When asked about the advice he would give the young people who want to pursue a career in this industry and achieve a successful career path, he noted that it is important to have enthusiasm and passion in what you do, remain focused and whatever you go into give it your 150%.

The particular radio show aims to provide information on shipping related matters and the prospects within the industry, with particular emphasis on the younger audience and is broadcasted on the radio station of the  Cyprus University of Technology (CUT), Cut-Radio 95,2. The radio show is produced and presented by Gina Panayiotou, Legal Manager of the Legal Department of Intership Navigation Co. Ltd., and co-hosted with Constandinos Papaminas, Claims Assistant at Norient Product Pool, in support the non-profit organization YoungShip Cyprus.