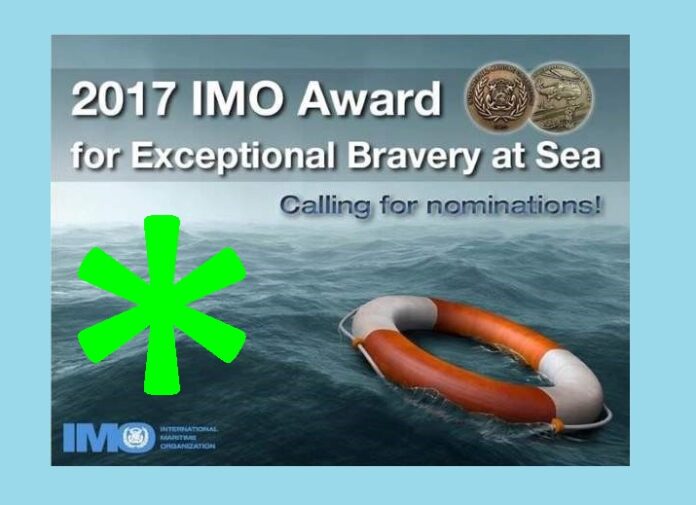 The IMO Secretary-General would be most grateful if nominations of candidates to be considered for the 2017 Award (for actions performed during the period 1 March 2016 to 28 February 2017) could be sent as soon as possible in order to reach IMO by no later than 14 April 2017. It should be noted that actions performed outside the qualifying period, and nominations received after the deadline has expired, will not be eligible for consideration.

Guidelines defining the purpose of, and the criteria for, granting the Award; the nominations process and how they are considered, assessed, judged and decided; the form of the Award; and the manner in which it will be awarded can be found in Annex 1 of the IMO Circular letter No. 3676

Nominations may be made by:

The recipient of the Award will be presented with a medal which will be accompanied by a certificate citing the act of exceptional bravery performed. The presentation will take place at a special ceremony to be held in conjunction with the celebration of a major IMO occasion, as appropriate.

Nominations should indicate clearly the nominating Government (and need not be confined to its own nationals) or organization and bear an appropriate mark of authentication. To this end, a nomination form, which should be completed, is found on the  IMO Circular letter No. 3676 (Annex 2).

In addition, in order to ensure that adequate information is given to enable the Panel of Judges to assess the merits of the candidates concerned and to facilitate the task of the Panel of Judges in considering the nominations for the 2017 Award, a form entitled "Description of Circumstances and Events" has been developed (annex 3), which should also be completed and submitted by nominating Governments/organizations, together with the nomination form, and a short narrative of events (not exceeding three pages).

In this connection, it would be appreciated if Governments and organizations, when nominating candidates, provide, in paragraph 7 of annex 3, sufficient information on the rescue act in the narrative, most especially the reasons why the rescue act in question warrants the description of "exceptional bravery at sea", to enable a proper and fair assessment by the judging panels.

All nominations should be submitted to ero@imo.org and/or addressed to:
The Secretary-General
International Maritime Organization
4 Albert Embankment
London SE1 7SR
United Kingdom