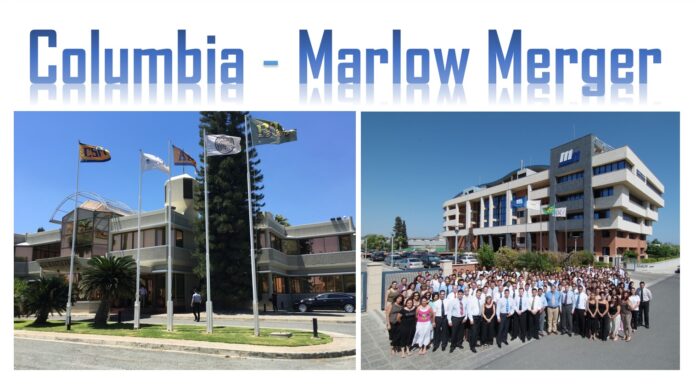 The Limassol-based Columbia Shipmanagement and Marlow Navigation, two of the largest ship management firms in the world, have announced recently that they have engaged in exploratory talks aiming at completing a merger. The proposed merger would create one of the “world’s largest” shipmanagement companies with the obvious synergies and greater efficiencies created to the benefit of current and future clientelle. The new entity will target harvesting economies of scale, including more optimal tonnage planning, and administrative, commercial and operational efficiencies in a highly competitive market. In addition to the significant scale advantages in ship management which arise, there will eventually be better career opportunities for both seafarers and shore staff which are of benefit to a ship manager’s customers, the Shipowners. Synergies between two already established firms, allows to not only maintain but to increase their combined high level of customer service while still remaining competitive in the marketplace.

Due diligence for the deal between the two German-origin companies based out of Cyprus is now complete, said Mr Mark O'Neil (CEO of the new entity), and completion merely awaits regulatory approval from anti-competition authorities in the countries where the two have important presences – including Cyprus and Germany – with a green light possible as early as June.

The new entity would be called Columbia-Marlow, on the grounds this combines the names in alpha order, and would be involved in the Technical Management of around 500 ships and the Crew Management of over 1,300 vessels.

Marlow Navigation joint Managing Director Jan Meyering said that crew numbers are another indicator of size, and the combined total of Columbia-Marlow would be 24,000 from a joint seafarer pool of around 35,000.

In the recent past, Columbia has been subject to rising speculation in the German market due to uncertainty over the scale of ship mortgage debt on the Schoeller-owned fleet of container ships and multipurpose vessels.

A merger of Columbia and Marlow would be the fourth major merger & acquistion in global ship management within 3 years, following the merger of the Christian F. Ahrenkiel Group with the MPC Group in April 2014, the merger of Anglo-Eastern and Univan in late 2015 and the takeover of Bibby Shipmanagement by market leader V Group in March 2016.