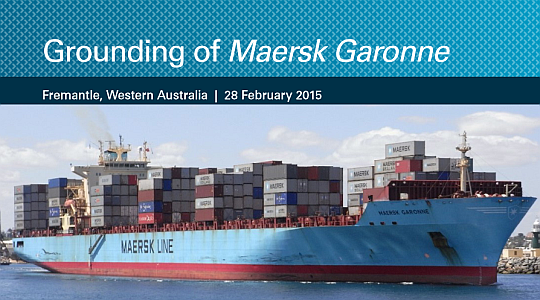 (www.MaritimeCyprus.com) The Australian Transport Safety Bureau (ATSB) issued the report of its investigation of the grounding of the container ship Maersk Garonne in Fremantle on 28 February 2015. The harbour pilot decided to delay the shipâ€™s entrance into the harbour when he realised that the assist tugs had yet to arrive. The shipâ€™s bridge resource management was not effectively implemented and did little to monitor the pilotâ€™s actions. As a result single-person errors that occurred went undetected.

What the ATSB found:

While the master retained responsibility for safe navigation of the ship, the harbour pilot was the only person actively focused on the pilotage. Consequently, single-person errors that occurred went undetected or inadequately challenged and uncorrected.

The investigation also found that procedures for tugs to be on station at the entrance to the port, or for their co-ordinated movement, were not clearly defined.

What has been done:

Fremantle Pilots, the portâ€™s pilotage provider, has reviewed and updated its website, procedures and training with respect to pilotage, passage planning and communications. This includes simulator training for emergencies.

Svitzer Australia, the towage provider, has updated its procedures to include defined on-station times for tugs. Fremantle Ports, the port authority, has advised that it has clarified the role of the vessel traffic service in assisting ship arrivals and berthing.

The safety actions noted above, together with joint simulator exercises, clarify the roles and responsibilities of all parties with respect to monitoring and management of pilotages. This increases safety margins and reduces the likelihood of a similar incident in the future.

Maersk Garonneâ€™s managers have issued fleet circulars to emphasise and clarify the roles and responsibilities of the master and shipâ€™s crew during navigation with a pilot on board. The managers have also implemented a fleet-wide program that includes education and auditing to ensure compliance with bridge procedures.

Comprehensive passage planning that includes risk-assessed contingency planning is vital to safe pilotage and underpins effective bridge resource management. The potentially severe consequences of a pilotage accident means that a low accident rate in the past is not a reliable indicator of safety risk.