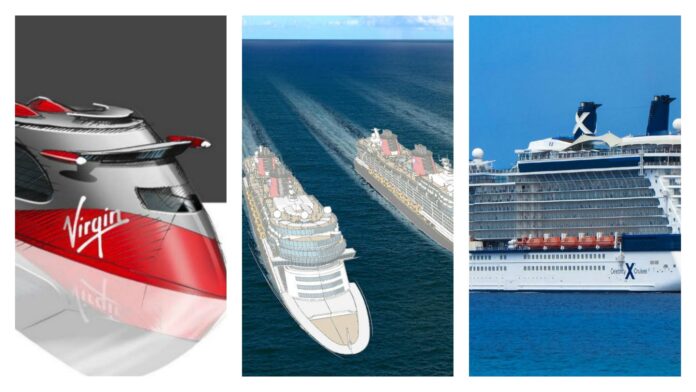 (www.MaritimeCyprus.com) Here are six future classes of cruise ships that we know little about but we can’t wait to take a cruise on.

Virgin Cruises –  Ever since business mogul Richard Branson announced that he was starting a cruise line, there has been an excitement in the air about what Virgin Cruises will bring to the industry.  The first of three 110,000 gross ton ships is scheduled to be completed in 2020 and the cruise line is promising to “make some waves” in the world of cruising.  What we know so far is that Virgin won’t be your typical cruise, millennials will be the target audience for the cruise line.

The seven night cruises to the Caribbean will leave out of PortMiami, the Cruise Capital of the World. While the design of the ships is still under wraps, Virgin stated that can you expect to see some of their signature red on them.

Carnival’s Mega Ships – Last week, Carnival Cruise Line announced that they are joining the era of mega cruise ships with two 180,000 gross ton ships. They will be fully powered by LNG (the world’s cleanest burning fossil fuel) and each carry 5,200 passengers.  The first ship will be delivered in 2020 and will be nearly 50,000 gross tons larger than their current largest ship, Carnival Vista.  We can’t wait to see what Carnival has in store for their first mega ship.

Disney’s New Ships – Earlier this spring, Disney Cruise Line announced that they have ordered two new cruise ships, with the first being delivered in 2021. While the ships will be slighter larger than Disney Dream and Disney Fantasy, these new cruise ships promise to have exciting new innovations that will be uniquely fun and distinctly Disney.  Disney sets the bar when it comes to the mainstream cruise lines.

Celebrity Edge Class – Celebrity Cruises has ordered a new class of ship that will be built upon the luxury experience of the Solstice and Millennium class ships.  With a total of four ships on order, the first will arrive in the fall of 2018. The cruise line stated that this “new class of ship will set the standard for premium world travel and deliver the next generation of modern luxury experiences that our guests know and love”.

Now that MSC Meraviglia has moved out of dry dock, construction should begin shortly on the first Edge class ship from Celebrity.

MSC World Class – While there have been some unconfirmed rumors on what these four 200,000+ gross ton mega ships will look like, they promise to be “unlike anything currently existing in the cruise industry”.  The first ship is scheduled to be completed in 2022 with a new ship being completed every two years.  MSC World Class ships will be the 2nd largest class of ships in the world, behind Royal Caribbean’s Oasis Class.

Viking Mississippi Cruises – Viking River Cruises, the leading river cruise line in Europe, is planning on bringing their award winning ships and service to the Mississippi River.  How soon will Viking be sailing on the Mississippi?  According to Viking CEO Torstein Hagen, the first U.S. Viking river ship will debut before Mardi Gras.  Which year? That we will have to wait and find out.