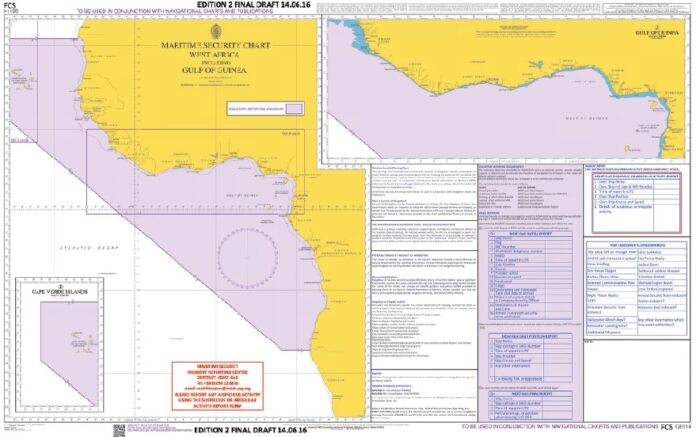 Reporting to Marine Domain Awareness for Trade â€“ Gulf of Guinea (MDAT-GoG):
The recently established MDAT-GoG is a service operated by the French and UK navies from centers in Brest, France, and in Portsmouth, England and aims to develop, maintain and share details of the maritime domain picture of the waters off Africaâ€™s western seaboard. The MDAT-GoG administers a Voluntary Reporting Area (VRA) scheme under which merchant vessels are encouraged to report position information while operating in the VRA.

The Center will provide advice and guidance on the maritime security situation and on mitigating the risk of armed robbery or other unlawful activities.
The MDAT-GoG provides a 24-hour manned service of military experts. The MDAT-GoG receives reports, shares important updates and provides guidance on vessel operating patterns, security risks with the Gulf of Guinea maritime community.

In addition, it isÂ strongly recommended that owners, operators and Masterâ€™s ensure fullÂ consideration is given to the Guidelines developed by BIMCO, ICS, INTERCARGO and INTERTANKO, and supported by the NATO Shipping Centre. Although piracy in the Gulf of Guinea is different from Somali piracy, large sections of the current Best Management Practices will also be applicable to the pirate attacks on vessels operating in the Gulf of Guinea.

The Guidelines aim to bridge the gap between the advice found in BMP4 and the prevailing situation in the Gulf of Guinea. Consequently, the Gulf of Guinea guidelines should be read in conjunction with BMP4 as they will make reference to BMP4 when relevant.