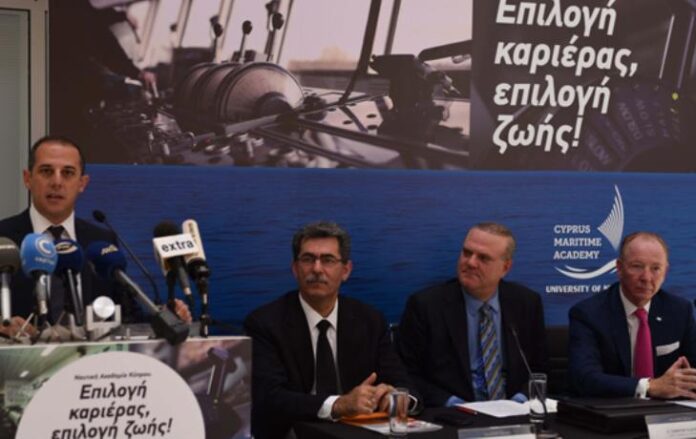 The opening of the Cyprus Maritime Academy was announced by the University of Nicosia in a press conference held on Thursday, 4th of August, at the Bernhard Schulte Shipmanagement, maritime training centre, in Limassol.

The Maritime Academy is ready to accept its first students in September 2016 and offers 4-year programs of study which will cover the three areas of the maritime industry: Nautical Science, Maritime Engineering and Maritime Electrotechnology. The aim is to attract local, EU, as well as International cadets, therefore all subjects will be delivered in the English Language.The Academy will receive 35-40 students who will have guaranteed internship position in maritime companies in Cyprus during their second year of study, while 25 of the graduates of class of 2016 will have a guaranteed job within the maritime industry.

As the only maritime academy in Cyprus, and an industry that employs around 55.000 seafarers on owned or managed ships and approximately 4.000 people on shore based premises on the island, it will promote great future employment opportunities for cadets of the Maritime Academy Cyprus either onboard ships and even in ship-owning, ship-management, insurance, ports & pilots, chartering & broking and so many more areas. The Academy will accommodate research, scholarship, and advancement in the maritime profession from a superb modern establishment. The example of discipline, leadership, aptitude and excellence for every maritime professional is passed on to our graduates by passionate experts in their field. The education team will provide a hands-on learning atmosphere where cadets will apply both theory and practice in response to ever progressing changes in the maritime industry. Transport Minister Marios Demetriades pledged the government’s support. Demetriades said that this was an effort that had the support not only of the government but of the shipping industry as well. The academy, Demetriades said, is here to fill a gap, since “we all recognise that with the increase of companies that set up operations in Cyprus, a lack of staff has been seen, especially in professions that have to do with seafaring”.

This initiative, he said, has the active support of the government, as his ministry had approved last year a €330,000 financial support scheme for training cadet sailors, “which encourages companies to employ these people, so that they can acquire the necessary experience”.

In addition, he said, as of this year, scholarships totalling €45,000 will be given for degrees related to the shipping industry, which can also be claimed by the students of the new maritime academy.

“Depending on the response, this grant may be increased,” Demetriades said. Maritime professions are addressed to both men and women he said, and urged the youth to “escape the impression that they had in the past and to consider seriously the opportunity of a seafaring career because it offers both financial and professional satisfaction”.

The university (of Nicosia), he said, has also a scheme in place for the guaranteed employment of graduates of the academy. He also expressed his conviction that soon other universities will implement similar initiatives.