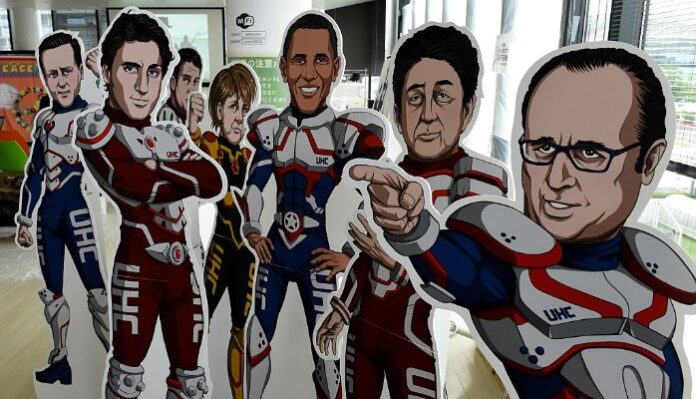 Japanese Prime Minister Shinzo Abe hosted his counterparts at the G7 Leaders Summit in Ise-Shima. The summit is to address a number of issues such as a unified approach to spur global economic growth and joint approaches to mitigate military escalation in Ukraine and Syria. But, arguably the most important area of discussion at the summit will focus on increasingly tense maritime disputes in East Asia.

During last month's G7 Foreign Ministers' meeting in Hiroshima, all sides agreed on a maritime security communique that prioritised the issue, and stressed the importance of a rules-based order underpinned by the United Nations Convention on the Law of the Sea (PDF).

The communique specifically pointed the finger towards Chinese actions in the East and South China Seas, noting "strong opposition to any intimidating, coercive or provocative and unilateral actions that could alter the status quo and increase tensions." The G7 grouping also targeted China by condemning its land reclamation in the South China Sea and the development of "outposts for military purposes".

This emphasis on maritime security is appropriate and necessary considering the significant developments over the past year, which continue to erode freedom of navigation and the peaceful resolution of disputes.

Specifically, China has been looking to coercively alter the status quo in both the East and South China Seas through a range of pressure tactics.

In the East China Sea, Beijing unilaterally declared an Air Defence Identification Zone (ADIZ) in 2013 and continues to engage in a sustained strategy of challenging Japan's effective control of the disputed Senkaku islands.

The fact that this G7 summit is hosted in Japan, the only Asian country in the grouping, underscores the importance of not downplaying the destabilising actions in the maritime domain.

China has also been bolstering the size and capabilities of its coastguard and has started to arm its vessels sailing near the disputed waters.

In the South China Sea, the situation has been devolving more acutely. Over the past two years, China has been ramping up its land reclamation and infrastructure building projects in the region.

On Fiery Cross Reef, west of the Spratly Islands, China has expeditiously worked to reclaim nearly 3 million square metres through dredging activities. Beijing is also building an airstrip, deep harbour and an array of military equipment aimed at maintaining and projecting effective control in the region.

China has also been conducting similar activities on our man-made islands, including Subi Reef and Mischief Reef, in an unprecedented cycle of escalation.

Other claimant states in the region, including Vietnam and the Philippines, have also engaged in land reclamation activities - but the scope and speed of these initiatives is not comparable with China's efforts.

The timing is critical for the G7 leaders to make a unified statement that the security and prosperity of the Asia-Pacific cannot be held hostage by Beijing's attempts at maritime suzerainty.

The fact that this G7 summit is hosted by Japan, the only Asian country in the grouping, underscores the importance of not downplaying the destabilising actions in the maritime domain.

Additionally, the importance of a strong message on maritime security is paramount considering this summer's looming decision by the UN-backed Permanent Court of Arbitration (PCA) regarding a case submitted by the Philippines against China over jurisdiction rights in the South China Sea.

In response to China's ramping up of activities before the PCA decision, the US continues to push forward on its Freedom of Navigations Operations in the disputed waters - much to the anger of Beijing, which has the most expansive claim in the area.

Washington has also made other moves to counter China's expansive claims, such as a key base deal to rotate US marines in the Philippines and a lifting of the decades-old arms embargo with Vietnam.

Despite this, there is little sign that Beijing will halt its expeditious pace of land reclamation in the area and indeed looks to be solidifying its presence through a sustained build-up of infrastructure on key reclaimed features such as Mischief and Fiery Cross Reefs.

The G7 summit provides a perfect opportunity to underscore the importance of transparency and freedom of navigation in Asia's seas.

At Ise-Shima, the leaders should publicly call for a transparent and effective implementation of the Declaration on the Conduct of Parties in the South China Sea and call for tangible steps for a robust Code of Conduct (PDF).

The summit also provides a venue for unilateral and bilateral statements of support for ASEAN states and a pledge to increase non-lethal assistance and capacity building for their coastguards - often the frontline responders in these waters.

Finally, and most importantly, leaders need to make a clear statement that Asia's prosperity and security are inextricably linked to the freedom of navigation and trade in its seas.

Source: J Berkshire Miller (Director of the Council on International Policy and is a fellow on East Asia for the EastWest Institute). The views expressed in this article are the author's own and do not necessarily reflect our views.