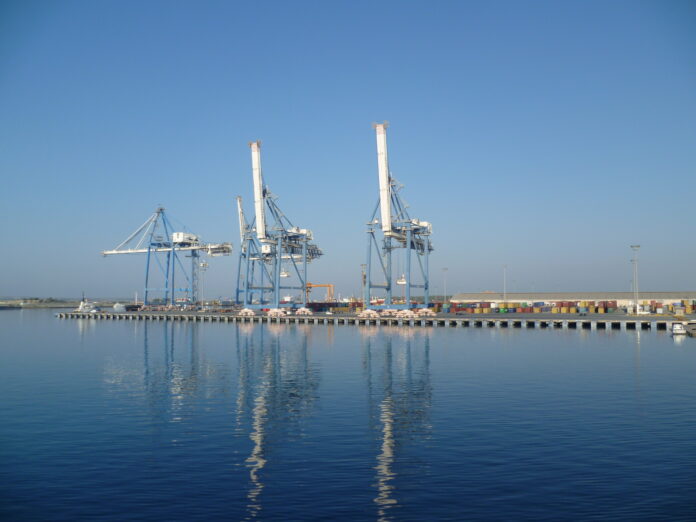 A new era of development begins for Limassol Port with the entrance of acclaimed international Operators and estimated proceeds for the Republic of Cyprus of approximately 1,9 billion euros over the life of concessions.

The concession agreements for the commercialisation of the activities of Limassol Port were signed today by the Minister of Transport, Communication and Works, Mr. M. Demetriades and the representatives of the selected consortia, marking the successful and timely conclusion of the project, just 10 months after the process was launched.

At the event, which took place at the ceremonies room of the Presidential Palace, Mr. Demetriades and Mr. Alecos Michaelides, Permanent Secretary at the Ministry of Transport, Communication and Works, were present as representatives of the Republic of Cyprus. The consortia representatives were Mr. Thomas H. Eckelmann, President and CEO EUROGATE-Group and Head of the Consortium, Mr. Adonis Papadopoulos, Chairman of Interorient-Group and Mr. Demetrios Mouskos, representing the consortium of companies consisting of EUROGATE International GmbH, Interorient Navigation Company Ltd and East Med Holdings S.A. for the Container Terminal and His Excellency Sultan Ahmed Bin Sulayem, Head of the consortium, Mr. Anil Wats, Mr. Ganesh Raj Jayaraman and Mr. Rado Antolovic, representing the consortium of companies consisting of DP World Limited and G.A.P. Vassilopoulos Public Ltd for the Multi-Purpose Terminal and the Marine Services. In his speech, Minister Demetriades highlighted the importance of the project and thanked all who contributed to its success: “A new page in the history of the Cypriot economy is written today. The agreements are not only a source of revenue for the economy but also the culmination of a project vital to the growth prospects of our country, one that will upgrade Cyprus’ role in the South-Eastern Mediterranean promoting it as an important regional centre of maritime commerce in the greater area. I also wish to highlight the contribution of the project towards the reform agenda within the timeframes agreed with the Troika and the exit of the country from the support mechanism under the leadership of the Ministry of Finance.

The importance of the project is invaluable as it contributes significantly in establishing Cyprus as a modern and safe investment destination, in a part of the Mediterranean where investment risk continues to increase. This demanding process would not have been possible without the hard work of all the parties involved. The excellent personnel of Ministry, the advisers, the Cyprus Port Authority and other related institutions, each played a significant part in achieving impressive results, keeping to strict timelines. In his greeting, Mr Alecos Michaelides emphasized the benefits of the swift completion of the project: “As a result of not only the tireless efforts of the Ministry personnel that proved once again their high professional standards, but also the broader cooperation of all the relevant bodies, the response to the process was unprecedented which resulted in an efficient and competitive tender. We are especially happy about the outstanding financial result as well as for the highly experienced international and local partners that will promote the prospects of Limassol Port in the coming decades.

The project, as the biggest commercialisation in Cyprus to date, serves as a model for the Republic of Cyprus and its efforts in becoming a modern centre for investment, trade and services”.Proceeds exceeding original estimates Under the terms of the concession agreements, the Republic of Cyprus retains ownership of the Limassol Port, while the consortia capitalise on their experience and know-how to ensure the future development through growth of commercial activities and the implementation of best operational practice. The estimated economic benefit to the Republic of Cyprus, in proceeds and investments, during the tenor of the agreements is approximately 1,9 billion euros, based on the business plans of the consortia. The amount exceeds the initial expectations of the government, while the beneficial consequences to the Cypriot economy from the increased activity of the Limassol Port for the Cypriot economy are expected to be material Limassol and the Cypriot economy will benefit from the modernisation and operational upgrade of the port as the consortia have undertaken to invest in infrastructure and systems that will deliver improved connectivity and better service to the users. Efficient and transparent procedure The well-designed commercial and financial approach as well as the transparent, properly documented process that was followed were key ingredients to the successful completion of the project. A success confirmed both by the number of bids from companies throughout the world and the bipartisan parliamentary support. Strategic partnerships The concessionaires are consortia representing partnerships between strong international and local companies that will work together with the Cyprus Port Authority, in its new role as the Independent Regulator, to develop the activities and the assets of Limassol Port.EUROGATE Group is an independent operator of container terminal stations in Europe, based in Germany with operations in 11 container terminal stations in Europe inclusive Morocco and Russia. DP World plays an important role in the global commerce, with activities ranging from terminal stations, to marine services, logistics and auxiliary services. In this project, Cyprus has managed to attract two leading global players, marking a symbolic investment axis that extends from Northern Europe to the Middle East, confirming its role as a regional hub of the Eastern Mediterranean. At the same time, the reliable local partners to the consortia ensure the transfer of know-how to the Cypriot economy and maintain the local character of Limassol Port.

In this way Limassol Port will be in a position to compete effectively, targeting a larger market. Next steps The transfer of the activities of the Port to the consortia is expected to complete in approximately 9 months. In parallel, the efforts to upgrade the regulatory framework of the Cyprus Ports Authority and its transformation to a modern, independent regulatory body continue apace.