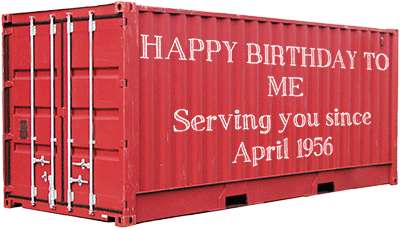 It is universally recognised as one of the greatest inventions of the modern world, one that completely changed the way in which business has been done since the 20th century and really and truly made the world a smaller place and the one true architect of Globalisation. The ubiquitous CONTAINER without which we may not be as connected as we are today has become an integral part of our life and it is turning 60 years old.

How it all started? Malcom McLean & Keith Tantlinger:

After many discussions and plans, the first lot of 58 containers were loaded on board the SS Ideal X, a converted World War II oil tanker, on 26th April 1956. Thus began the journey of the shipping container and there has been no turning back for containerization since then.

In due course, ISO standards were set for containers and this enabled mass production and usage of standardised containers which also enabled the ports, container terminals and handling equipment to be standardized across the globe, the evolution of which has resulted in the current mega-ships capable of carrying more than 20,000 TEUs on a single ship. Benefits of containerisation ranges from As per Clarksons Reasearch, from 1971-1996 (20 years after containers first came in to being), there was 41 million TEUs of additional trade generated with about 3 million TEUs of container capacity delivered to serve the global industry..

From 1997 till 2016, this increased to 136 million TEUs of additional trade with 20 million TEU capacity delivered.

Not just in shipping, containers are now used in many countries to create affordable and cheap housing and also give them a second life.

Lastly the below infographic takes a look at how innovative thinkers around the world are using some of the 300 million shipping containers that currently sit empty and unused. While most people think of obvious solutions like recycling the raw materials, a few architects have used these storage containers to construct modern buildings. Enjoy....

Infographic: The Most Terrifying Creatures in Deep Sea