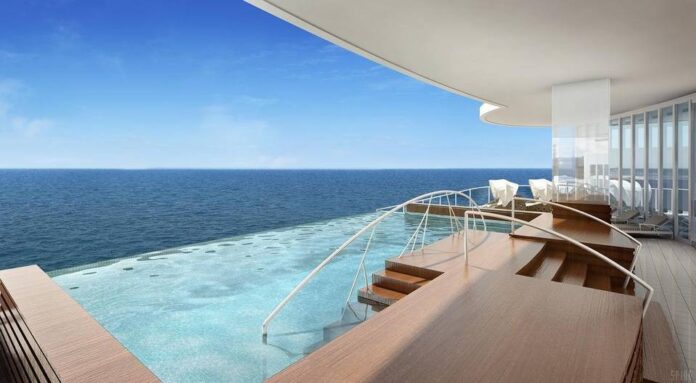 A dazzling new crop of seven cruise ships will debut this year, each one trying to outdo the others. (photo featured one level up: Seven Seas Explorer, Canyon Ranch Spa)

This year brings a new ship from Carnival, two from Royal Caribbean, and the first new ship from Holland America in six years. In addition, luxury lines Seabourn and Regent Seven Seas each will introduce a new ship, “and these will be the two best ships in the world,” Chiron says. Meanwhile, Viking, better known for river cruises, will debut its second ship, the Sea.

Three of the new ships are also the first in a new class of ships, as well as the largest in that line’s fleet, and a fourth evolves into a larger version of its class.

"IT WILL BE ONE OF THE BUSIEST YEARS FOR SHIP INTRODUCTIONS IN AT LEAST 10 YEARS". Stewart Chiron, The Cruise Guy

Take a peek at the drawings of these new ships, and one thing is clear. They all will be sleek and streamlined; more the clean lines of Ikea than the fussy plushness of a bordello. Missing are loud prints, giant zigzag patterns, gaudy chandeliers, swag curtains, dark leathery bars and gigantic theaters.

In their place are clean, clear colors, fab minimalist furniture, gracious and funky dining options galore and ever more elaborate activities, including an IMAX theater and elevated recumbent bicycle course.

Ship sizes range from 763-passenger vessels to 5,400-passenger behemoths. One ship, Royal Caribbean’s Ovation of the Seas, will likely never be seen by Americans because it will sail China and Australia, geared to those markets.

Among the trends? Cavernous traditional ship theaters are on their way out. For instance, Holland America’s new Koningsdam will have show lounges — including one just for classical music — and a medium-size venue, the World Stage, where passengers sit close to the stage and even surround it.

“The trend is, the [big theaters] take up way too much space and are completely under-utilized,” Chiron says. “With people eating dinner at different times it is hard to get passengers to go see a show at a certain time. So cruise lines are going to smaller venues and a higher frequency of show times. That also gives the ship space for more cabins.”

One thing all the new ships will share is the latest technology, which means the ships will have faster Internet; more environmentally friendly power, waste and maintenance systems; use cleaner fuels; and be more efficient.

ALL THE NEW SHIPS WILL SHARE THE LATEST TECHNOLOGY, WHICH MEANS THE SHIPS WILL HAVE FASTER INTERNET; MORE ENVIRONMENTALLY FRIENDLY POWER, WASTE AND MAINTENANCE SYSTEMS; USE CLEANER FUELS; AND BE MORE EFFICIENT.

And onboard dining keeps evolving, with offerings splintering into endless possibilities for foodies looking to have a unique meal. That’s a challenge, considering the ship must feed hundreds or thousands of other passengers who also are seeking their own unique culinary experiences.

Here’s a rundown on the new ships:

At 133,500 gross tons, 1,055 feet in length and a capacity of 3,934 passengers, the Carnival Vista will be the largest the cruise line has ever built. It is scheduled to be delivered to Carnival in April.

With Vista, Carnival steps up its amenities game, offering features that better compete with Royal Caribbean and Norwegian ships. The ship will include the first IMAX Theatre at sea, an onboard brewery that will serve three house-made beers, and an open-air cycling ride called SkyRide with recumbent bikes suspended from an 800 foot track above the ship’s top deck. Indoor and outside seating will be available at some restaurants, a new feature for the line.

Koningsdam, to be delivered in April, is a midsize ship, but it will be Holland America’s biggest. It will hold 2,660 passengers, at two per room — 25 percent more than its last ship. Gross tonnage, a measure of the ship’s volume, will be 99,000 tons. It will be the first of the line’s new Pinnacle class; a sister ship will launch in 2018.

Although Holland America is now owned by Carnival Corp. and its headquarters are in Seattle, it was founded in the Netherlands in 1873. The ship’s name — the word koning means “king” in Dutch — was chosen to reflect the company’s heritage.

▪ Itinerary: Northern Europe, then the Caribbean out of Fort Lauderdale, arriving Nov. 9.

ROYAL CARIBBEAN OVATION OF THE SEAS

Ovation of the Seas, the line’s third Quantum-class, ship will launch in the fall and will be based in Australia. Quantum-class ships are smaller than Royal Caribbean’s world’s-biggest-cruise-ship Oasis class. Vital statistics: 4,180 passengers, 167,800 tons.

ROYAL CARIBBEAN HARMONY OF THE SEAS

The biggest change will be the arrival of the new record-holder for world’s largest cruise ship, Royal Caribbean’s 5,479-passenger Harmony of the Seas, which is set to debut in Europe in May, then make its way to Fort Lauderdale by November.

227,700Gross tonnage of Harmony of the Seas, which will take the title of world’s largest cruise ship from its sister, Allure of the Seas

The third Oasis-class ship from the line, it’s a sister ship that will be slightly larger — 1,187 feet long, gross tonnage 227,700 — than the current record holders for world’s largest cruise ship, the two Oasis-class ships that currently call Port Everglades home: Oasis of the Seas and Allure of the Seas.

▪ Features: An aqua theater with divers, a bionic bar where drinks are served by robots, the musical Grease, a “Central Park” open space, carousel, and water park with The Ultimate Abyss, the tallest slide at sea.

▪ Itinerary: The Mediterranean; then arrives in Fort Lauderdale Nov. 4 for Caribbean cruises.

After building the world’s biggest fleet of river boats, California-based Viking Cruises took to the seas, launching the first ship in its new ocean cruise line, Viking Star, last spring. Sister ship Viking Sea joins the Star this spring and will make its first revenue cruise in April. A third oceangoing ship, Viking Sky, is under construction and will debut in 2017. The ships hold 928 passengers and are 48,000 tons.

ALTHOUGH VIKING OCEAN CRUISES’ NEW SHIP WILL STAY IN EUROPE THIS YEAR, THE LINE’S OTHER SHIP, VIKING STAR, WILL SAIL CARIBBEAN CRUISES OUT OF PUERTO RICO NEXT WINTER.

While the new ship will stay in Europe, the curious can get a taste of the new cruise line when the Viking Star comes to North America in the fall. The Star, which has been doing European cruises, will cross the Atlantic in September, sailing to Montreal, then down the Atlantic Coast, and will sail Caribbean cruises out of Puerto Rico starting in December and into February.

▪ Features: Scandinavian style, infinity pool, a “Spa and Snow Grotto” where you can get hot and cold Nordic spa treatments. Like Viking’s river cruises, basic cruise fare includes Wi-Fi, alternative restaurants, wine and beer with lunch and dinner, and a shore excursion in every port.

One of two luxury ships debuting this year, the $450 million Seven Seas Explorer will be Regent’s fourth ship, larger than the other three. It also will be significantly younger — the line’s next newest ship, Seven Seas Voyager, was delivered in 2003. Explorer, which will sail its maiden voyage from Monte Carlo in July, will have a capacity of 738 passengers and size of 54,000 gross tons, compared to 700 passengers and 42,363 tons for Voyager.

Regent has been aggressively promoting the Explorer as the most luxurious ship at sea, with a 3,875-square-foot two-bedroom suite with spa that sells for $10,000 per day.

▪ Itinerary: Mediterranean, then Caribbean and Panama Canal cruises out of Miami starting Dec. 4, returning to Europe at the end of March.

The second luxury ship of the 2016 season, Seabourn Encore will be delivered in December and be christened in January 2017 in Singapore. The ship will spend the first part of the year cruising South Asia, Australia and New Zealand, then move to the Mediterranean in the spring. Florida is not yet on its itineraries.

Encore is based on Seabourn’s Odyssey-class ships but has been redesigned to add another deck and expanded public areas. Its tonnage will be about 41,000, compared to 32,000 tons for the Odyssey-class ships, and 600 passengers compared to 458. Many of the Odyssey class’ signature features, such as Seabourn Square, will carry over to Encore, but most have been redesigned by Adam D. Tihany (who also did much of the design on Holland America’s Koningsdam). A sister ship, Seabourn Ovation, will join the fleet in 2018.

▪ Features: Sleek architecture and lots of room for every passenger; every suite has a private veranda.