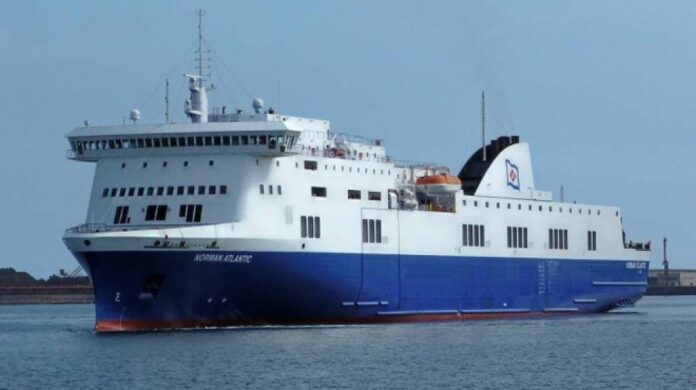 Passengers of the stricken car ferry Norman Atlantic are helped from the container ship Spirit of Piraeus in Bari harbour, after being rescued on December 29, 2014. (Reuters: Yara Nardi)

A person is lifted on an Italian navy helicopter as the car ferry Norman Atlantic burns in waters off Greece, December 28, 2014. (Reuters: Marina Militare)

Emergency authorities have finished rescuing hundreds of passengers from the Norman Atlantic, but passenger and crew lists show more people could have been on the ferry. Italy's defence minister Roberta Pinotti told a news conference that the Italian navy rescued 427 people, bringing the total accounted for to 437. However, Greek authorities originally announced that 478 passengers and crew were on board when the fire broke out and left the ferry drifting in high seas and treacherous weather off Albania.

"There is a embarkation list on which the names of the 427 passengers and 56 crew appear," Mr Lupi said. "It is up to the departure port to match up their list and the people (rescued). "That is why we are continuing our (search) effort: we cannot know what the exact number was."

Italian prime minister Matteo Renzi praised the work of the Italian-led rescue effort, which he said had helped avoid a "massacre". The Italian navy said the Italian captain Argilio Giacomazzi was the last of the crew to leave the ship in a rescue effort that defied high seas and freezing weather in a 36-hour drama.

"It was hell," Greek opera singer Dimitra Theodossiou said after being evacuated by helicopter. "It was very cold, terribly cold. Nearby ships sprayed water from their hydrants [to fight the fire] and we were completely wet." She was treated for a mild case of hypothermia at a hospital in Lecce, Italy, and later released.

Another passenger, Robert Mane, said there was little warning that a fire had broken out, and many people struggled to get into lifeboats. "We were asleep when the smoke entered out cabins. Flames and smoke were engulfing people from all sides," he said. "The crew tried to somewhat coordinate the evacuation into the emergency boats, but that proved to be impossible. "At that stage people were just throwing themselves into the boats. It took me 25 minutes to get into one."

Italian and Greek helicopter crews winched more than 400 people to safety despite gale-force winds and thick smoke. Bad weather hampered earlier efforts to attach cables to the ferry for towing. Rough seas and thick fog in the area also led to the collision of two merchant ships, resulting in at least one death. Italy's coastguard confirmed the first casualty of the disaster when it recovered the body of a man who had thrown himself off the burning ferry.

Around 130 of the almost 480 people on board had been evacuated, the majority when a lifeboat was successfully lowered from the stricken vessel, but an operation to airlift the remaining passengers to safety - two at a time - could take hours.

"We are doing everything we can to save those on board and no-one will be left helpless in this tough situation," he said.

"It is one of the most complicated rescue operations that we have ever done."

“They tried to lower some boats, but not all of us could get in. There is no co-ordination,” one said. “It’s dark, the bottom of the vessel is on fire. We are on the bridge, we can see a boat approaching ... we opened some boxes and got some life vests. We are trying to save ourselves.”