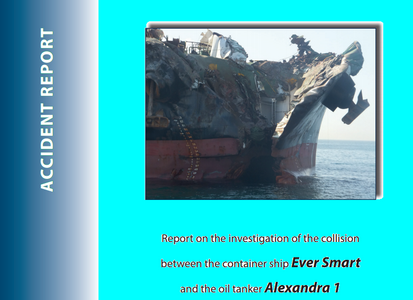 (www.MaritimeCyprus.com) The UK Marine Accident Investigation Branch (MAIB) issued the report of its investigation on the collision between the container ship Ever Smart and the tanker Alexandra 1 on 11 February 2015 in Jebel Ali, UAE.

A harbor pilot was transferring from the outbound container ship to the inbound tanker when the ships collided at the entrance to the portâ€™s approach channel.Â Neither vessel was properly monitoring the otherâ€™s position and movements.

The collision resulted from several factors. In particular, a passing arrangement was notÂ agreed or promulgated and the actions of both masters were based on assumptions.

Alexandra 1 was unnecessarily close to the channel entrance and the tankerâ€™s masterÂ acted on scanty VHF radio information.

In addition, Ever Smartâ€™s bridge team did not keepÂ a proper lookout or monitor the tankerâ€™s movement. They only realised that Alexandra 1Â was close ahead seconds before the collision when alerted by the port control.

The accident occurred within Jebel Aliâ€™s port limits. The precautions of pilotage andÂ the portâ€™s vessel traffic service, which would normally co-ordinate and de-conflict theÂ movements of vessels in the port area, were ineffective on this occasion.