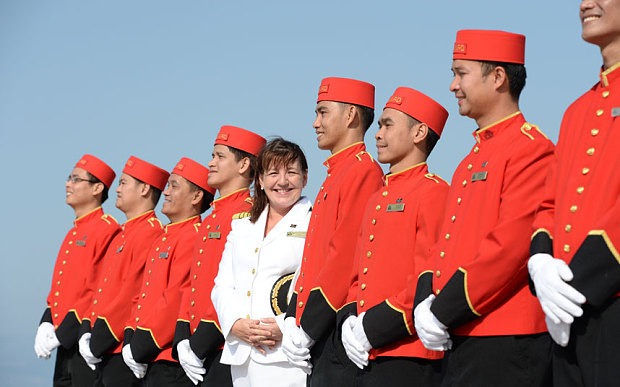 When was your interest in ships and sailing first piqued?

I’m from the Faroe Islands and grew up by the sea so the interest was always there. As a 16-year-old I worked on cargo ships as a stewardess during the school holidays but I soon realised I didn’t like the cleaning part of that, so I found something different to do on board. My curiosity in seeing the world was a huge driver in my choice of career, combined with the enjoyment of sailing.

How did you come to be the company’s first female captain? Had others tried and failed?

It was a natural career path. I started in 1997 as a deck officer. Eventually hard work and dedication opened the door to becoming a captain. I’m not aware of any other females that have tried and failed to become a captain with Cunard, but the competition is, as it would be elsewhere, tough. It’s nothing out of the ordinary.

Was this the culmination of a long-term ambition?

Not really. I always thought I’d only be on ships for a few years before settling down to start a family, as one does. But life took me in a different direction. I started to become interested in the cruise industry a few years after I obtained my Masters License, mainly because the ships sailed around the world and my ambition was to travel. I’ve always had the full support of my family and friends.

How difficult was the training process?

Were there gender obstacles to overcome? I studied in Denmark, where the system is quite different. It was probably around nine years before my Masters License was fully endorsed. The training involves basic seamanship tasks, safety awareness and knowledge, stability and navigation, among other things. It’s a demanding education and you have to work hard, regardless of gender. I strongly believe that as a woman in this line of work, you really decide yourself what obstacles you have to face – it’s all about how you present yourself and how hard you work.

What are your earliest memories of Cunard? Did you know of their ships as a child?

My earliest memory of Cunard is probably just after I started my career at sea – it’s not the kind of company that goes unnoticed by seafarers. It's a great honour to be part of the line's 175th anniversary year – I’m delighted to be a part of the team.

What qualities are essential to being a successful captain of a cruise liner?

The most essential qualities are people skills, diplomacy, dedication, approachability and respect.When I was appointed in 2010 I was taken aback by the overwhelming interest in me as a person that it created, and I found that challenging in every aspect. The best aspect of the job is receiving positive comments on completion of a voyage. I like seeing how crew members light up, knowing they’ve achieved what was set out – their professional pride, basically.

In a professional capacity, are there still any ways in which you feel you are treated differently?

As my position is still pretty unique it will always create attention. The pleasant surprise is that it’s mostly very positive.

How do you unwind on board when you're not on duty?

I watch TV and – believe it or not – one of my favourite hobbies is knitting, so I knit a couple of sweaters every time I’m on board.