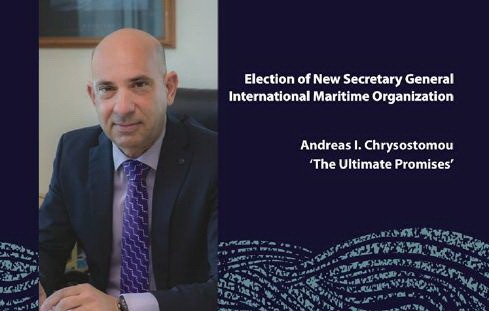 The IMO  Secretary General election is expected to be held in the IMO Council in June-July 2015. Cyprus has nominated Mr. Andreas Chrysostomou, Acting Director of the Department of Merchant Shipping (DMS), for the position of Secretary General at the International Maritime Organisation (IMO). Mr. Chrysostomou is a renowned shipping personality, who enjoys international recognition through his successful career in shipping. He has been involved with the IMO since 1994 and has contributed to the work of the Organization through different positions, beyond that of the national representative of Cyprus.

Throughout the years he has been actively involved and has constructively contributed in all spheres and levels of the Organization’s work, ranging from safety and security, protection of the marine environment, legal and administrative issues. He has served as Chairman of the Design and Equipment Subcommittee of the IMO and for the decade 2003-2013 has served as Chairman of the Marine Environment Protection Committee (MEPC), one of the main Committees of IMO, for many years. Mr. Chrysostomou has been serving the Civil Service of the Government of the Republic of Cyprus since 1993 and he is currently the Acting Director of the Department of Merchant Shipping (the Maritime Administration of Cyprus). Furthermore, he is currently the Immediate Past President of the Institute of Marine Engineering, Science & Technology (IMAREST).

Cyprus, being a keen supporter of IMO, attaches high importance to its special and central role in facilitating international cooperation, a necessary prerequisite for developing, maintaining and consolidating a comprehensive regulatory framework for shipping. Through this candidacy, all these important attributes will be addressed, driving IMO to work as a team serving a global industry and safeguarding the transport needs of humanity.