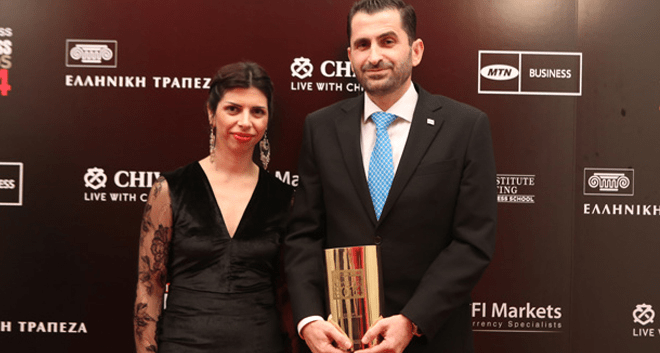 For the seventh consecutive year, the In Business Awards – which took place at the Hilton Park Hotel in Nicosia on January 22, 2015 – has honoured the crème de la crème of the business world in Cyprus. The year 2014 In Business Awards’ Editor’s Choice Award was bestowed upon the Cyprus Shipping Chamber in honour of its unfailing commitment to the island’s shipping industry.

Director General of the Chamber, Thomas Kazakos, took to the stage to accept the award, highlighting the fecundity of the industry, its contribution to Cyprus, and the Chamber’s dedication to serving the shipping industry’s community. Media Manager of IMH, Elena Leontiou, presented the award.

This public recognition of the Chamber is a direct reflection of the high quality and standards of professional services that all Member-companies have been offering worldwide for all these years. This Award also strengthens even more, the solid commitment of the Chamber and in particular, the Secretariat, to continue working for the enhancement of Cyprus Shipping and furtherance of Member-companies interests.

CSC, a short intro:
A trade association, the Chamber was founded in 1989, and has succeeded in spearheading considerable growth and unity within the shipping sphere in Cyprus.

With originally 17 founding members, the Chamber today comprises all the major shipowning, shipmanagement, chartering and shipping related companies based in Cyprus.

Today, the Chamber’s Member-companies located in Cyprus and the wider Shipping Sector in Cyprus, collectively employ around 4500 persons ashore and more than 55,000 seafarers of various nationalities onboard their vessels.

The main purpose of the Chamber is:

At such, the Chamber acts as a lobbying group for the promotion and safeguarding of the legitimate interests of its professional Member-companies, at a national level through its close relations with the Cyprus Government and Parliament, as well as at an international level though its membership at the various regional and international shipowners associations.

Since its formation, the Chamber has become a very influential body and no policy decisions concerning shipping matters are taken by the Government without consulting the Chamber. This has been achieved through the participation of the Chamber at numerous joint working groups and committees with various Government bodies/agencies, and in particular the Ministry of Communications and Works and its Department of Merchant Shipping, with both of which, the Chamber maintains excellent relations. Furthermore, the Chamber is regularly called to appear before Parliamentary Committees as the representative body of the Shipping Industry in Cyprus, when matters affecting Cyprus Shipping are considered at the House of Representatives. The Chamber also cooperates with and actively participates therein as Member of numerous local professional trade and employers organisations, in an effort to improve and constantly enhance the shipping infrastructure of Cyprus.

In all its dealings with the various Ministries and Departments, the Chamber's primary objective is to assist the Government at all levels to adapt new and existing laws, policies and procedures to the needs of the Cyprus fleet and the resident Shipping Industry in a world which is highly competitive and at the same time more conscious of the need to raise quality, improve safety and protect the environment. An example of the Chamber's co-operation with the Government is the active participation in the continuous harmonisation of Cyprus with the EU Acquis Communautaire.