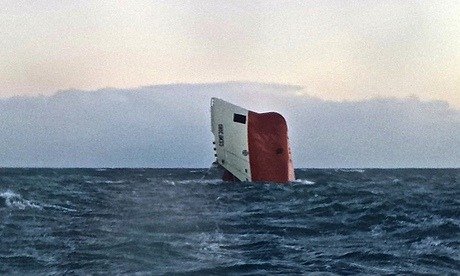 The ship is believed to lying upside on the seabed, said Tony Redding, a spokesman for German shipping company Brise, which manages the Cemfjord. Further sonar searches would be carried out on Tuesday to work on how the ship can be recovered.

Severe weather is likely to have played a part in the capsize and sinking of the ship, Redding said. “It must have played some part in what happened but it will take some time to put the picture together because, sadly, we’re not in a position to interview the crew and the vessel is submerged in around 68 metres (223ft) of water.

“We look for abnormalities and at the moment we don’t have any apart from the fact that there was severe weather at the time.”

The Marine Accident Investigation Branch (MAIB) is investigating the incident.

Brise last heard from the vessel at lunchtime on Friday and there was no distress call.

The crew on an NorthLink ferry, the Hrossey, alerted the coastguard after spotting the Cemfjord’s upturned hull about 10 miles east of the Pentland Skerries at about 2.30pm on Saturday.

The families of the missing crew, seven Poles and one Filipino, have been notified.

The 272ft bulk cement carrier had been bound for Runcorn, Cheshire.

It has emerged that the vessel was involved in an incident last July when it was grounded off Denmark. The Russian captain was found to have excessive levels of alcohol in his blood and was dismissed. The company said no one was injured and there was no pollution.