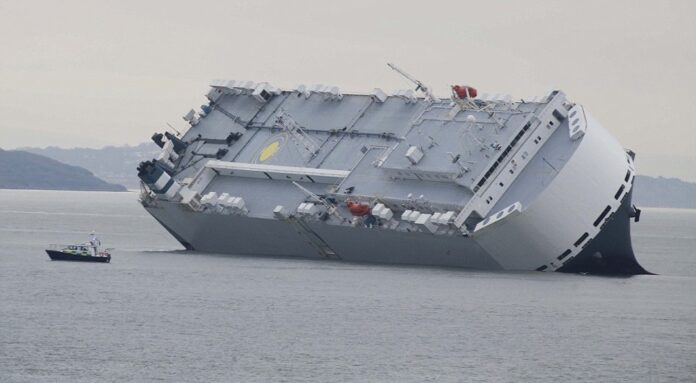 An attempt to 're-float' a 52,000 tonne cargo ship grounded off the Isle of Wight has failed, meaning it will remain stuck for at least another three days because the tides will not be high enough to re-float her.

The cargo ship Hoegh Osaka became grounded on Bramble Bank in the Solent, near the Isle of Wight, at 9.20pm last night, forcing emergency services to rescue all 25 crew members on board.

Today salvage experts lost a race against time as they unsuccessfully tried to re-float the huge ship by using four tugs to pull it off the sandbank.

A spokesman for the ship's owner today said it was half full when it left Southampton - a load equating to about 750 vehicles. During the rescue operation, the 51,000-tonne Singapore-registered ship listed at 45 degrees Salvage specialist Svitzer has sent teams to the site after it was appointed by the ship's Norwegian owner Hoegh Autoliners, while bosses from the company have flown to Britain today from where they will conduct a press conference late this afternoon.

Svitzer is expected to assess the vessel to ensure it is in a safe condition and there is no spillage or pollution. They are currently liaising with surveyors from the Maritime and Coastguard Agency (MCA) who are on standby to assist with the operation. A salvage tug lights the hull of the stricken Hoegh Osaka cargo ship after it ran aground on a sand bank in the Solent in Cowes, England A car ferry passes the stricken Hoegh Osaka cargo ship after it ran aground on a sand bank. All 25 crew members were rescued overnight National Maritime Operations Centre commander Steve Carson said: 'All of the crew have been accounted for and other then a couple of non life-threatening injuries, everyone is safe and well.'

A Yarmouth RNLI crew member was winched aboard the ship to help pull up casualties who were trapped on board.

Tom Pedersen, volunteer Calshot RNLI helmsman, said: 'This is not the sort of call-out you expect on a Saturday evening but we had a brilliant response from the RNLI volunteer crews and all the other agencies involved, resulting in the successful rescue of all the ship's crew.

'Fortunately, the rescue helicopters managed to winch most of the crew to safety in quite challenging conditions, while two people were rescued by the Calshot RNLI lifeboats. One of them leaped around 8 metres from the ship into the water and was picked up immediately by our inshore lifeboat. The other was rescued from the bow of the ship.'

The 180 metre long vessel this morning remained listing badly to one side after what was believed to have been a major failure of its navigation system. Crew members on board the ship told rescuers it was not taking on any water.

The Isle of Wight Red Funnel ferry is pictured passing the ship, which this morning remained stuck on a sandbank near Southampton

The massive container ship (pictured) was built in 2000 and has a maximum weight of almost 158,000 tonnes An emergency rescue boat, pictured to the right, is dwarfed by the huge ship which was left stranded on the sandbank The Hoegh Osaka, pictured, ran aground less than an hour after it left Southampton at 8.20pm last night

The Singapore registered vessel was heading to the German port of Bremerhaven at the time of the incident.

The vessel was built in 2000 and weighs 52,000 tonnes. It is understood the cargo ship, which has a nine-metre draught, turned sharply to the left as it passed the notorious Bramble Bank sandbank near Cowes and ran aground.

A statement from Hoegh Autoliners last night said it was assessing the damage and stability of the vessel.

'Hoegh Autoliners primary concern has been for the crew on board and it has been confirmed that one crew member has been injured and he was airlifted to Queen Alexander Hospital in Portsmouth with non-life threatening injuries,' it said.

It's understood the crew member suffered a broken leg in the incident. 'The remaining crew have been taken to HMS Daedalus at Stubbington by helicopter and will be accommodated locally overnight. However, a small number of senior officers remain on board.'

The Marine Accident Incident Branch (MAIB) has been informed and the crew members confirmed that the vessel was not taking in any water, the company said.

Bramble Bank is a well-known sandbank in Southampton Water and is the scene of an annual cricket match between two yachting clubs when the sands are exposed in low spring tides.

In November 2008, the Cunard liner Queen Elizabeth 2 with 1,700 passengers on board ran aground on Bramble Bank but was able to continue its journey on the rising tide after four tugs pulled it clear. According to www.marinetraffic.com the vessel left Southampton and made a sharp left turn and run aground The stricken carrier has become a tourist attraction with car parks along the coast filling up with people wishing to view it.

Hampshire police posted advice to motorists on Facebook warning them that the area had become 'extremely busy'.

They said: 'Good morning all, just a piece of friendly advice ... car parks along the coast by Calshot are extremely busy. This is due to people being interested in seeing the car transporter ship which has run aground.

'We're monitoring the traffic situation around all 'vantage points' and just wanted to make you aware.' MARITIME EXPERT: 'EVERYONE KNOWS IT'S THERE, IT'S ON EVERY CHART' Maritime expert Professor Simon Boxall, of the National Oceanography Centre based in Southampton, said there could be a number of reasons why the ship had grounded.

Two possibilities were that it was done intentionally to avoid a bigger catastrophe or may have been due to a mechanical fault, he said.

He said: 'Interestingly, the ship went to the west of Bramble Bank whereas usually it would have gone to the east, past Portsmouth and across the Channel towards Germany.

'Visibility, given it was night, was perfect, there was just a light wind of around 2mph, wave conditions were good. Basically there was no weather-related reason for it to have problems.

'This ship has been in and out of Southampton before, the pilots are usually very experienced and they know the Bramble Bank so one wonders if there was a problem and the skipper decided, sensibly, that the safest thing to do was to ground it on the bank.

'Was there an instability problem?'

He added: 'The big question was whether the high tide would turn it on its side which would have made things very difficult.

'It didn't and that means the salvage operation has time and could wait for spring tides which are higher and arrive around Tuesday.

'It's now a question of taking things gently and carefully and trying to get it afloat safely and into port.

'It's basically a very large car ferry at a 45 degree angle so it will be a mess inside. There will be a lot of cargo - probably high end vehicles from BMW, Mini, Land Rover or Jaguar.

'At least if it was going to happen it's probably the best place in the world for it to happen. The MCA is here, the Oil Spill Response are here.

'There are many powerful tugs in Southampton which can be used to tow it - it's a big ship but it's an average size ship for Southampton.

'There are also big lifting cranes which can be used if they can get it in close enough.'