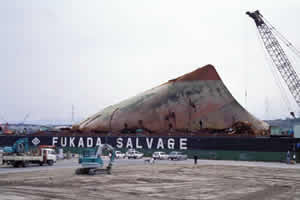 On 2 January 1997, the Russian tanker NAKHODKA broke up in heavy seas off the Oki Islands in the Sea of Japan.

The tanker was carrying a cargo of 19,000 tonnes of medium fuel oil from Shanghai to Petropavlovsk, Russia.

The master died in the casualty, but the remaining 31 crew members were rescued. There was an estimated 6,200 tonnes of oil immediately released in the breakup.

Oil from the breakup and from the bow came ashore along approximately 600 miles of coastline.

Response resources and organization were often ineffective and inadequate, particularly in the prevailing bad weather. More than 200,000 people took part to the cleaning operations, recovering in a little over a month all the oil which arrived on the coast. Nearly 36,000 m³ of waste stored in barrels, bags or pits had to be disposed of. This incident remains the worst oil spill in the history of Japan.