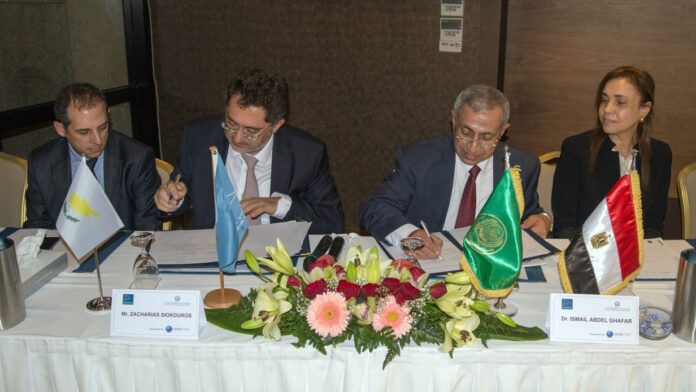 The ceremony for the Signing of a Memorandum of Understanding between the Maritime Institute of Eastern Mediterranean (Mar.In.E.M) and the Arab Academy for Science, Technology and Maritime Transport (AASTMT) took place in Limassol, Cyprus on 12th December 2014. The Ceremony was held under the Auspices of H.E. Mr. Marios Demetriades, Cyprus Minister of Communications and Works.

The MoU endorses a long standing commitment for collaboration between the two organizations.  It provides opportunities for embarking upon mutually beneficial joint activities in relation to Maritime Research and Development, Maritime Education and Training, Cooperation in International and Regional Fora, Green Shipping and Quality Shipping.

Addressing the signing ceremony, the Cypriot Minister of Communications and Works, Mr. Marios Demetriades, highlighted that Cyprus` ambition is to be a step ahead of competition at any time, both as an international registry and as a base for international shipping and shipping related operations.

He added that the government’s shipping policy is founded on three pillars: quality, competitiveness and reliability, pointing out that the maintenance of a high standard quality fleet and the effective implementation of the internationally applicable safety, security and environmental protection standards, is the foundation on which Cyprus builds its reputation as a serious and quality maritime flag, as well as, a reliable base for international operations.

Referring to the MoU, Mr. Demetriades stated that Cyprus and Egypt are two countries in the Eastern Mediterranean that both invest in the maritime industry and the maritime professions, as they recognize the political, economic and social importance of shipping.

His Excellency gave assurance that his Ministry fully supports and endorses such cooperation and strongly believes that the signing of this MoU can only have positive and innovative outcome in the fields of maritime research, education and training.

The President of Mar.In.E.M. Mr. Zacharias Siokouros, in delivering his speech underlined that the signing of a Memorandum of Understanding for cooperation between the Maritime Institute and the Arab Academy of Science, Technology and Maritime Transport is an event that marks an important milestone in the roadmap towards achieving what has been the Vision of the Institute since its inception i.e. the cooperation on Maritime Affairs of the Region’s countries with the aim of creating a “Maritime Cluster in the Eastern Mediterranean” - as an essential aspect of a “European Maritime Strategy for the Eastern Mediterranean” – based on the model of the EU Strategy for the Adriatic and Ionian region.

Such a cluster should encompass the whole range of sea‐related economic activities, that would subsequently foster synergies between the various regional stakeholders ・ currently scattered and in some cases isolated within National boundaries ・ and will boost the development of a Common Maritime Economy that will benefit everyone within the Region in line with the European Union’s Integrated Maritime Policy and the Limassol Declaration for the promotion of Blue Growth. In his speech, the President of the Arab Academy for Science, Technology and Maritime Transport, Dr. Ismail Abdel Ghafar, expressed his honor to be in Limassol and reaffirmed his willingness and commitment to further strengthen, the already close ties, between the two institutions, as well as, for the two countries overall, Cyprus and Egypt.

Dr. Ismail Abdel Ghafar indicated that the primary goal of the MoU is to achieve rational outcomes in the best interest of both parties and noted that it will provide opportunities for joint activities.

In her speech, H.E. Dr. Hebei El Marassi, Ambassador of the Arab Republic of Egypt, said that Cyprus’ strategic positioning in the east Mediterranean makes the island one of the most important neighbors of Egypt, that already maintains excellent relationships with the Arab world and plays a significant and important role, specifically with regards to the shipping sector in the region.

Earlier that morning the President and the delegation of the AASTMT attended various important and productive meetings with the Minister of Education and Culture, Mr. Costas Kadis, the Minister of Communications and Works, Mr. Marios Demetriades and the Director of the Oceanography Center, at the University of Cyprus in Nicosia, Dr. George Georgiou. The delegation also visited the Joint Rescue Coordination Centre in Larnaca. They were briefed on the JRCC’s capabilities, on its role in case of a crisis and possible evacuation from the Middle East as well as for JRCC’s future plans in improving coastal and sea surveillance

Before the signing ceremony, the President of AASTMT and other representatives attended a joint meeting with several officials from the Maritime Cluster of Cyprus consisting of the Cyprus Shipping Chamber, the Department of Merchant Shipping, the Limassol Chamber of Commerce & Industry, the Cyprus Ports Authority and the Cyprus University of Technology. Present at the meeting were also H.E. Mr. Marios Demetriades, Minister of Communications and Works and H.E. Dr. Heba ElMarassi, Ambassador of the Arab Republic of Egypt.

Please follow this link for the photos of the event: https://app.box.com/s/n92md435skq6ya2i3wf4