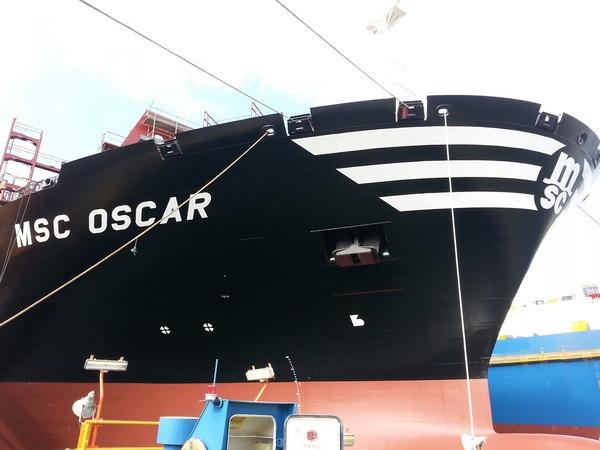 The battle over the title of world’s biggest boxship continues.

MSC Oscar, built by Daewoo Shipbuilding & Marine Engineering and classed by DNV GL is the newest cargo vessel built for Mediterranean Shipping Company (MSC). It will launch in January 2015, and at 19,224 teu, the containership will take the record for world’s largest.

Measuring is 395.4 metres long and 59 metres wide with a 16-meter draft, the 197,362 dwt MSC Oscar was built by Daewoo Shipbuilding and Marine Engineering and is classed by DNV GL.

Despite its greater carrying capacity, MSC Oscar will measure just 395.4 meters long, making it shorter than the 400 meter long CSCL Globe and also the 400 meter Maersk Triple-E’s, which can carry about 18,000 TEU. MSC Oscar will however be slightly wider, with a beam measuring 59 meters compared to the 58.6 meter beam of the CSCL Globe. Triple-E’s, on the other hand, also have a beam of 59 meters, leaving many wondering where exactly they are finding the room to put the extra boxes without increasing the dimensions of these vessels.

The Panama-registered containership will be inaugurated during the first week of January 2015 and will join the Albatross service later that month.

The MSC Oscar is owned by China’s Bank of Communications and on long-term charter to MSC. A similar vessel, MSC Oliver, is due for launch in April 2015.