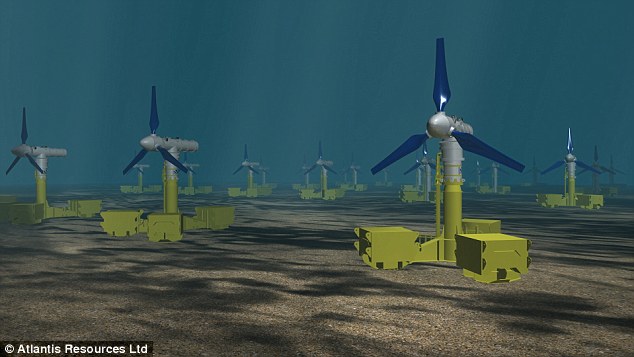 Wind turbines are often bemoaned for their unsightly appearance, noise and danger to local wildlife - but what if we put them underwater?

By the end of the year they plan to install turbines off the Scottish coast and they say the technology could be used as a more environmentally friendly source of green energy in future. It’s thought that harnessing its energetic waters could power up to a third of Scotland.

HOW THE UNDERWATER WIND FARM WILL WORK

The turbines will be lined up 525ft (160 metres) apart, weighted down by scrap metal. As the water depth in the Pentland Firth is about 130ft (40 metres), small craft will be able to sail over the area of about four square miles (10.4 square kilometres) without fear of hitting them.

When complete in 2020, the Pentland Firth project will generate enough electricity for 400,000 homes.

There are further plans to exploit the Pentland Firth over the next two decades, installing 1,000 turbines that will generate 1.6 gigawatts of energy, enough for more than a million homes.

Because the waters are so rough, little fishing takes place and there is no danger to fish life as the blades revolve so slowly.

The turbine farm, which will be clearly marked on charts, is well away from sensitive military areas where Royal Navy submarines operate. The first turbines are set to be placed at the turn of the new year, with more being placed over the next few years.

Unlike wind turbines, underwater turbines would never be ‘off’ as there is a constant flow of water.

MeyGen’s turbines are slightly smaller than their land counterparts but generate a similar amount of electricity a year - about one megawatt - and the company plans to eventually build several hundred. This would be enough to power 175,000 homes.

They rotate 12 to 14 times a minute, while compared to regular wind turbines they are slightly more ‘stubby’ with smaller blades.

Speaking to MailOnline, Meygen CEO Dan Pearson said he hoped Phase 1 of construction would be completed by the end of 2016.

He explained that the turbines will be about 0.9 miles (1.5km) from the shore and they will be ‘on a par with wind turbines' in terms of their productivity.

‘The costs are higher but this is brand new technology,’ he adds. ‘We have to make it work first.’ Mr Pearson is also adamant there won’t be significant danger to nearby marine life. And MeyGen’s project will be in quite shallow water, meaning the turbines can be dropped down by a crane.

By the early 2020s they want to deploy up to 398 megawatts of offshore tidal stream turbines for the UK National Grid.

And there are further plans to exploit the Pentland Firth over the next two decades, installing 1,000 turbines that will generate 1.6 gigawatts of energy, enough for more than a million homes.