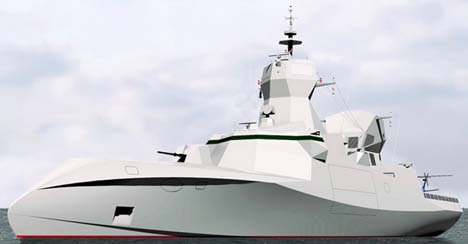 Cherbourg based CMN (Constructions Mecaniques de Normandie) has unveiled the C Sword 90 stealthy corvette at the Euronaval naval expo in Paris this week. The stealth vessel is one of three new ship designs the company is launching, all positioned to address the growing needs of world navies to support increasingly demanding missions encountered at the high sea and littoral waters. In addition to maritime missions including surface and anti-submarine warfare the vessel is well equipped to conduct maritime security missions, and support land operations from the sea To carry out those missions the C Sword 90 can be configured to support commando and ground operations operating a helicopter and two 11 meter Rigid Hull Inflatable Boats (RHIBs). These configurations can also supported by loading two containers, storing mission specific payloads, cargo and supplies. The boat has a large aft deck configured to operate one medium size (10 ton) helicopter or unmanned aerial system (UAS) in day and night.

The boat has also the facilities to operate two RHIBs, which can also be unmanned surface vessels (USV) and underwater unmanned vessels (UUV). The C Sword 90 is operated by a crew of 65 personnel. The ship also has berths for 20 additional personnel. The design has been optimized to sustain high maximum speed (28 knots) and extended autonomy, covering 7,000 nautical miles with an average speed of 12 knots. (It would do 5,000 nm cruising at 14 knots). Part of its efficiency results from the inversed stem, contributing for enhanced propulsive efficiency and sea keeping.

The round bilge shaped hull also contributes to better endurance in strong wind and rough sea conditions. The corvette’s firepower consists of one 76mm or 57mm gun mounted at the fore section and two remotely controlled weapon stations on port and starboard side, mounting 20mm or 30mm guns. The vessel is equipped with eight launchers of MM40 Exocet anti-ship missiles plus a vertical launcher packing 16 anti-air/anti-missile missiles. Additional air defense is provided by two additional launchers mounting two short-range anti-aircraft missile. Decoy systems are also used for self-defense offering both an anti-missile protection with radar or infrared guidance and along with electro-acoustic anti-torpedoes protection. The vessel is designed to accommodate the infrastructure and equipment necessary for anti-submarine warfare (ASW) operations, including a hull mounted sonar, a towed sonar and two torpedo-launching tubes each mounting three tubes.

The biggest naval vessel ever built by the Cherbourg Shipyard, C Sword 90 is one of three new designs CMN unveiled at Euronaval – the others were the Ocean Eagle trimaran, configured as patrol boat or mine hunter and a new variant of the classic Combattante missile boat – the 46meter long FS46. The Normandy based shipyard that has been building trawlers and mine sweepers since 1948 introduced the Combattante class patrol boat in 1963, a design that was later adapted by the Israelis with their Saar II gunboats and Saar III missile boats, an innovative concept pioneered by the Israeli Navy with its Gabriel anti-ship missile. By 1967 CMS completed six Combatant II boats for the Israelis, but the delivery of those boats was blocked by the arms embargo the French government imposed on Israel following the 1967 Six Day War. The boats were later smuggled to Israel from Cherbourg and sailed to Israel on a clandestine trip. Since the construction of those first hulls CMN delivered more than 90 Combattante class boats to navies around the world. CMS continues to develop new mine hunters and missile boats, introducing the CIRCE mine hunter in 1970 and Combattante II built for the German Navy in 1973, Combattante III built for Greece in 1977 and IIIM delivered to Tunisia in 1983. In 1994 the company introduced the DV15 High-speed Interceptor and in 1997 delivered the first of eight P37 patrol boats for the Kuwaiti Navy. In 2009 CMN delivered the first of six Baynunah stealthy fast attack crafts (FAC) built for the UAE.