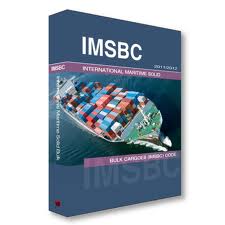 In June 2013 the IMO Maritime Safety Committee adopted Resolution MSC.354(92) specifying amendments to the International Maritime Solid Bulk Cargoes (IMSBC) Code. Contracting governments to the SOLAS Convention have been able to apply the amendments in whole or in part on a voluntary basis since 1 January 2014. Mandatory compliance with the amended IMSBC Code requirements will commence on 1 January 2015.

The IMSBC Code is subject to updates every two years to reflect changes in the nature and variety of solid bulk cargoes presented for shipment and advances in expert understanding regarding the safest ways to carry established solid bulk cargoes. Amendment 02-13 is the second amendment to the IMSBC Code since compliance became mandatory on 1 January 2011. The principal changes are summarised below:

Section 3 – Safety of personnel and ship

Section 4 – Assessment of acceptability of consignments for safe shipment

Sub-section 4.3 - Certificates of test; the requirement in paragraph 4.3.2 for the shipper to provide a signed certificate of the Transportable Moisture Limit (TML) and a signed certificate or declaration of the moisture content has been expanded. There is now a requirement for such documentation to be issued by an entity recognised by the Competent Authority at the port of loading.

A new paragraph 4.3.3 has been added stating that when a concentrate or other cargo that may liquefy is carried, the shipper shall have in place procedures for sampling, testing and controlling the moisture content of the cargo to ensure it is below the TML while onboard the vessel. The procedures are to be approved, and their implementation checked, by the Competent Authority at the port of loading. A copy of the approval document issued by the Competent Authority is to be provided to the Master or his representative.

A new paragraph 4.3.4 addressing the problem of uncovered barges with low freeboard transporting Group A cargoes to other vessels has been added; shippers are to include measures to protect cargo on barges from precipitation and water ingress in the procedures required by paragraph 4.3.3.

Sub-section 4.4 - Sampling procedures; there is a new paragraph 4.4.3 requiring shippers to facilitate access to stockpiles by the ship’s nominated representative for the purposes of inspection and sampling for subsequent testing. This provision is particularly welcome and should ease one of the greatest hindrances currently encountered when precautionary P&I surveys of Group A cargoes are arranged.

Section 7 – Cargo which may liquefy

In sub-section 7.2 - Conditions for hazards; the existing paragraph 7.2.2 has been replaced with the sentence “Liquefaction does not occur when the cargo consists of large particles or lumps and water passes through the spaces between the particles and there is no increase in water pressure”.

Section 8 – Test procedures for cargoes which may liquefy

Sub-section 8.4 – Complementary test procedures for determining the possibility of liquefaction; additional guidance has been added to this section which describes how to conduct a “can test”, advising that if a sample remains dry following such a test, the moisture content of the material may still exceed the TML.

Paragraph 9.2.3 - Materials Hazardous only in Bulk (MHB); an updated definition has been added along with details of the chemical hazards that would cause a material to be classified as a MHB.

A number of changes have been made to the following existing cargo schedules:

The following new schedules have been added to Appendix 1 of the Code:

Grain Screening Pellets and Wood Torrefied have been added to the list of non-cohesive cargoes detailed in Appendix 3.

The Index in Appendix 4 has been updated to include the additional cargoes included in Appendix 1. The material “Spodumene” has also been added to the Index with a reference directing the reader to the schedule for Sand.

The foregoing is a summary of some of the important changes to the IMSBC Code set out in Amendment 02-13. Full details of all amendments can be found in Resolution MSC.354(92) Amendments to the International Maritime Solid Bulk Cargoes (IMSBC) Code.

Managers are reminded to ensure their vessels comply with the amended IMSBC Code requirements from 1 January 2015 if they are not already doing so in whole or in part in accordance with flag or port state requirements.