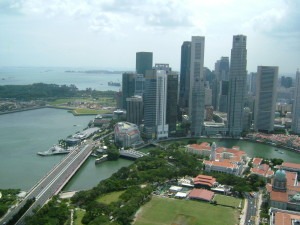 The highly competitive shipmanagement scene in Singapore has just gained a new player. It has no ships yet but expects to receive its first contracts soon.

The founding partners of Admiralty Ship Management — Ashok Prasad, Arbind Singh and Venkatasubramanian Sundar — could have continued their careers as top executives of leading shipmanagers until retirement. Instead, they have quit their comfort zone and struck out on their own.

Their goal is to turn their new company into Singapore’s top boutique shipmanager. Their names should be familiar to anyone who has had dealings with Asian shipmanagers. Prasad was managing director of Anglo-Eastern Ship Management, a company he had been with for several decades, Singh had spent the past seven years as fleet group manager at Thome Ship Management and Sundar had been head of fleet personnel at several well-known companies, including Univan and Ishima.

All three cite an itch to do something for themselves and the challenge of starting a new company as the main reasons for striking out on their own. Headquartered in an office building in Singapore’s Cecil Street, Admiralty claims it will offer high-quality, personalised shipmanagement at competitive rates. It is a claim made by almost every other shipmanager but, given the well-established reputations of the Admiralty team, one that is potentially achievable.

Product delivery is one thing but the company is entering a market where competition is stiff, profit margins are slim and owners are perpetually demanding that prices be reduced even further. How then does Admiralty expect to survive, let alone thrive, under such conditions?“We are not going to be the cheapest shipmanager in town, nor do we want to be the biggest. Our business model is based on taking on a limited number of ships with good owners who are willing to trust us to look after their assets, while at the same time recognising the value that we provide,” said Prasad. “We have to pick our customers carefully because in this business the margins for error are very small. Some shipmanagers who have large clients who are unable to pay their management fees are suffering. We don’t want to end up in such a situation,” added Singh.

Admiralty will start off by managing bulkers and boxships. It has no ships to manage at present but Prasad says discussions are underway and he expects to take on the management of several vessels in the very near future.“We [the management team] have very close contacts in the shipowning community and they have been showing a good deal of interest and support,” he said. Although Admiralty was started in March, its management team only opened the doors for business at the beginning of this month.

In the interim, they have been setting up the required infrastructure ranging from putting in place IT systems to establishing contracts with crewing agencies in a variety of countries and organising pre-joining crew training courses at the BP Marine training facility in Mumbai (a privately owned maritime training school with no connection to energy major BP or its tanker division).

“The mistake that many new shipmanagers make is to first go out and get ships to manage and then try to build the infrastructure. This always leads to problems. We focused first on getting the infrastructure in place and, now that we are ready, we are going out to find ships,” explained Sundar. With everything now lined up, Admiralty has the capability to start managing an initial 15 ships.The team says it could raise this number to 30 with the addition of more staff and licences. But, says Prasad, the intention is to grow the company slowly and never exceed the capabilities of its supporting infrastructure.