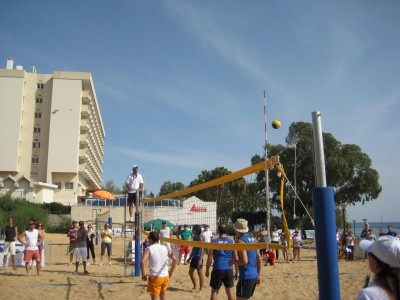 The Charity Beach-Volley Tournament is the Cyprus Shipping Chamber's main Annual Sporting/Charity Event. The Tournament is organised by the Chamber, under the auspices of the Minister of Communications and Works, with great success since 1996.

The high participation of Chamber Members at the Beach-Volley Tournament shows their great interest in contributing financially for a good cause and at the same time enjoy a friendly competition among colleagues and friends.

The net proceeds from the Charity Beach-Volley Tournament are donated to the “One Dream One Wish” Children’s Charity Association, which fulfils the wishes of children suffering from cancer and related diseases.

We would like to congratulate the Beach Volley Team from MARLOW NAVIGATION who won the Championship of the CSC Beach Volley Tournament yesterday 5th of  October, 2014.

Marlow Team won Uniteam at the quarterfinals, V-Ships at the semifinals and Unicom at the finals with the score 3-1.

Congratulations go out to all participating teams who contributed to a worthy cause.