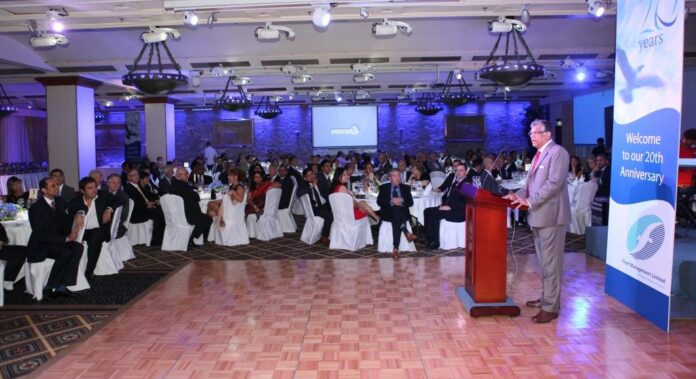 Fleet’s 20th Anniversary party warmed hearts and stimulated minds, as its senior management team, customers, partners, government and other state officials, and representatives from the islands shipping industry and business community toasted its achievements. The highlight of its 3 day long weekend celebrations was a glittering celebratory cocktail party and dinner at the Hilton Hotel in Nicosia Cyprus, on Friday the 19th of September.

Key note speeches by its senior management team Mr. Sunil Kapoor, Director and General Manager, FML Ship Management Limited, Cyprus; Mr. Kishore Rajvanshy, Managing Director, Fleet Management Ltd, Hong Kong and Mr. Harry Banga, Chairman of the Caravel Group of which Fleet is a subsidiary, served to share with guests the excitement of a young company that has grown ship by ship on the back of satisfied customers and a hands on approach to become the world’s 4th largest professional ship manager in a span of less than 20 years.

The celebrations included an eclectic mix of fireworks, live music, drama and dance, foot tapping DJ Music and a sand art show that captured its 20 years history to great effect. THE highlight of the event was the congratulatory toasts raised by many of Fleet’s existing customers including its very first customers Vroon Shipping BV and Spar Shipping AS. The anecdotes shared quickly revealed what has made Fleet so successful – a group of hard working and dedicated people  for whom work is a just a way of life.