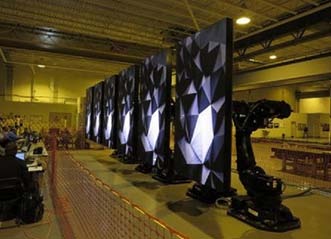 ABB’s Azipod electrical propulsion systems set the industry standard for luxury cruise vessels whose ever-larger size demands powerful technology to boost their maneuverability and reliability. Now, ABB and its robots are entering new waters: Cruise-ship entertainment. Royal Caribbean International is outfitting its newest vessels, the Quantum of the Seas and Anthem of the Seas, with video screens mounted on sophisticated ABB robots to dazzle its guests.
From the factory floor to the open seas This month, an editor for Design News wrote about the project in which 100-inch video screens are mounted to six ABB industrial robots, the likes of which you’d ordinarily expect on an automobile factory floor, not in the interior of a luxury cruising vessel.

To offer something new and visually spectacular for passengers traveling between ports around the world on some of the world’s largest ships, Royal Caribbean chose ABB robots that previously have been used to augment the live stage acts of rock bands including Bon Jovi. Completing this project represented a unique challenge, Nicholas J. Hunt, manager of product technology at ABB Robotics USA, told the publication. For one, the RoboScreens installed on the Quantum Class ships – along with additional amenities including a skydiving simulator and a sports and recreation complex complete with bumper cars and a roller rink – are the first on any sort of moving vessel and must be robust enough to accommodate the rolling of the sea. ‘Wow’ factor “The entertainment industry is all about the ‘wow’ factor and freshness,” Hunt said. “This means everything you do at the presentation level is new, and therefore a one-off.”

First, a little background: Typically, ABB’s IRB 6620 five-axis robot is at home inside a car factory, performing precision tasks including spot welding on vehicles for customers including Daimler. ABB developed it working with major automobile makers to be compact and agile, with low maintenance. Among other things, characteristics that make it a prized industrial partner are its light weight, 150-kilogram payload and a robust wrist design capable of deftly handling equipment like spot weld guns. These same qualities offered designers the maneuverability they needed for the Royal Caribbean project, where these machines must manipulate the video screens in intricately choreographed patterns that enhance visual footage taking place simultaneously. To complete the work for Royal Caribbean, ABB worked with well-known robot designer Andy Flessas, of Las Vegas-based Robotic Arts. Bon Jovi, casino entertainment – and now cruise vessels
Flessa’s previous creations have been used on the Bon Jovi Live 2011 tour, as well as in additional casino entertainment productions. Numerous ABB businesses were involved in the Royal Caribbean project, too, including the ABB Marine Power Group in Helsinki and the ABB Robotics North American team in Auburn Hills, Mich. Additionally, ABB’s PC software team in Gothenburg, Sweden, was brought on to solve programming challenges to ensure that these robots are seaworthy. For the record, Royal Caribbean’s Quantum of the Seas is scheduled to launch this November, while the company’s Anthem of the Seas is slated to launch in April 2015.

To view a video from Royal Caribbean about the robot project, take a look at http://www.royalcaribbeanpresscenter.com/video/361/hi-tech-on-the-high-seas-robotic-entertainment-debuts-on-quantum-of-the-seas-/